END_OF_DOCUMENT_TOKEN_TO_BE_REPLACED

“All the male heroes bowed their heads in submission;  Only the two sisters proudly stood up to avenge the country.”   – 15th century poem

For over a thousand years, the Chinese Han Dynasty ruled over Vietnam as a colonial power. Vietnam had resources, people, and most importantly, the Red River Delta. The Red River Delta is an area in the north of the country that was cultivated for wet rice production, was an important international trading port, and was the land from where the Vietnamese traced their origins. The Han Dynasty had been encroaching on the Lac Lords of Vietnam, the heads of the feudal system that was the foundation of Vietnamese culture. These were the landed aristocrats that had been the ruling noble class for over two millennia.

At first working together in trade and negotiations, the relationship grew authoritarian, and the Chinese began to tax, subjugate, and forcibly assimilate the Vietnamese into the Chinese Empire. By 111 BC, the Han Dynasty had complete control over Vietnam and had divided the kingdom into territories that were ruled by Chinese appointed governors. For a similar story, read Chick History’s article on Boudica..

Fast-forward 150 years to 39 AD and we meet one such Chinese governor, To Dinh, who ruled over the Me Linh prefecture. The Vietnamese Lord of this prefecture was General Lac, who had two daughters, Trung Trac and Trung Nhi. The two daughters grew up in a military household and were trained in the art of warfare, weaponry, and martial arts. When it came time for a marriage for the eldest daughter Trac, she married the son of the neighboring prefecture who also hailed from a military noble family. Together these two noble families created a powerful military alliance.

China’s repressive regime, taxation of goods, imprisonment of “uncooperative” Vietnamese, and confiscation of lands was causing open hostility among the aristocracy and peasant populations. Most importantly for our heroines, the Chinese replaced the Vietnamese matriarchal family-system with its strict patriarchal system with rigid social control. This is the kiss of death for any society with any form of equality between the sexes.

As daughters of a noble Vietnamese family, the Trung sisters were in line to inherit their father’s land and titles. According to Chinese law, they could not. Then, the unthinkable happened. Trac’s husband was executed for protesting a new tax imposed by To Dinh. Trac and Nhi’s inheritance, livelihood, and way of life were in jeopardy. Trac refused to go into mourning and instead she and her sister put all their military training to work and began mobilizing the remaining noblemen and peasants to their cause. Their goal was to oust Governor To Dinh and return Vietnam to an independent kingdom. They organized an army of 30,000 soldiers and led them into battle. 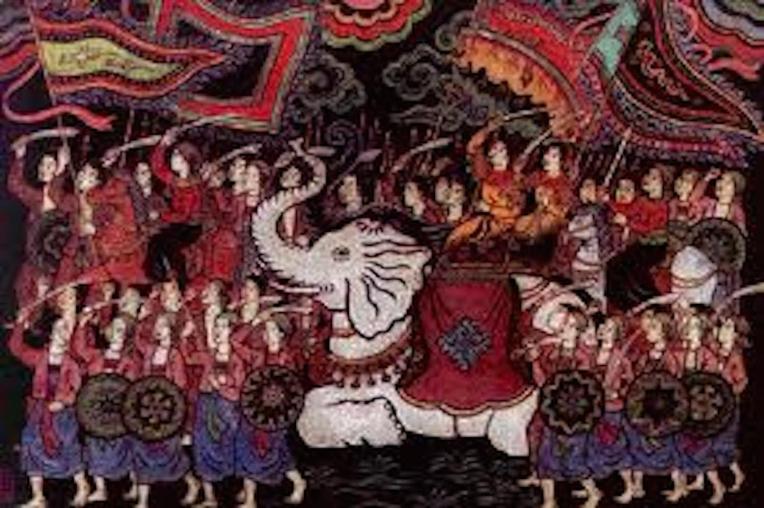 In literature and art the Trung sisters charge into battle atop elephants with swords drawn. Surrounding them are the armies raised by the lords from their individual prefectures. At the head of these armies were the generals the Trung sisters chose to be commanders. Temples dedicated to the Trung sisters that remain today list the leaders and generals of their army. The majority of them are women, including their own mother. One of the generals was a woman named Phing Thi Chinh, who according to legend, gave birth during the revolution and would fight in battle with her newborn strapped to her back.

But why would so many follow two women? Trung Trac and Trung Nhi were also descendants of Lac Long Quân, the original Dragon Lord, the founder of the Vietnamese people. According to their creation myth, The Dragon Lord’s wife laid 100 eggs that would go on to become the 100 noble families of Vietnam. Trac and Nhi’s family were one of those elite. As a matriarchal society were women could hold equal ranking as men, following two women who claimed to be descendents of the Dragon Lord seemed like a no brainer.

Within several months, the Trung sisters had liberated 65 northern citadels in Vietnam and ousted the repressive governor. Trac now commanded an army of 80,000 soldiers. She proclaimed herself Queen of an independent Vietnam and established her capital in her hometown at Me Linh. Some records indicate Nhi was the better warrior. If this is true, it would seem that the Trung sisters followed the typical royal family model of the eldest child being crowned monarch and the younger child named commander of the nation’s army. Other accounts tell us that the two sisters ruled as co-regents of the newly independent Vietnam.

Trac’s reign was dedicated to restoring Vietnam back to its traditional ways. She immediately ended all tributary taxes to China, distributed the treasury of the governor back to the Lac Lords, and attempted to return to a feudal political system. For almost three years, the Trung sisters successfully fought and held off the Chinese, who were not going to give up the Red River Delta so easily.

In 43 AD, the Chinese sent a new general to deal with the Trung Sisters. This time, the Han Emperor put all his resources into the army and taking back Vietnam. Many of the original lords and supporters of the Trung Sisters had returned to their land, taking their armies with them. What was left was no match for the invading Chinese army and they defeated the Trung sisters and put Vietnam back under colonial control. According to Chinese history, the Trung sisters were executed. According to Vietnamese history, they committed suicide by drowning in a river to maintain their honor.

Centuries later, the Trung sisters became heroes and the first Vietnamese nationalists. A seventh-century retelling imagines Trac’s declaration to her army as putting her duty to country first over her duty to family

“Foremost, I will avenge my country,
Second, I will restore the Hung lineage,
Third, I will avenge the death of my husband,
Lastly, I vow that these goals will be accomplished”

As with all national heroes, the Trung sisters’ exploits have become epic over time. In one account, they kill a tiger that no one had been able to capture and then write their manifesto on its skin. Every February, there is a celebration held in their honor commemorating their martyrdoms. They remain unifying national heroes to the Vietnamese identify and their association with rebellion against invasion is still evoked today.

This poignant video compares the Trung sister’s rebellion against China almost two thousand years ago with the struggles of Vietnam in the twentieth century to regain independence from foreign occupiers.

< Previous Next >
+ Add your own event Eventbrite
Loading Comments...